How to Tell Your Partner You Have Herpes – The Do’s and Don’tDo I Have Herpes? Common Symptoms of Genital Herpes 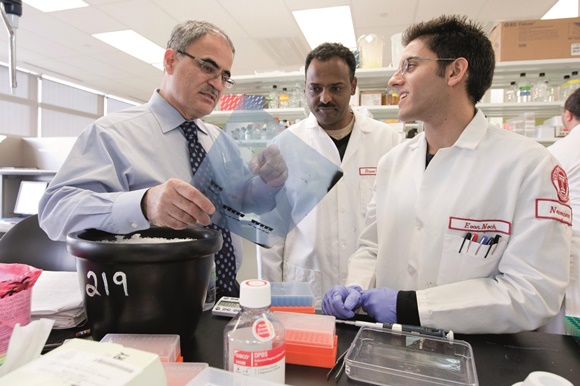 With each day that passes, researchers and scientists are learning more about HSV1 and HSV2. This research is leading to many new and exciting methods of herpes treatment. One day, it may lead to a long elusive vaccine and cure for genital herpes and cold sores. Practically every week, headlines announce the research that is being conducted around the world and it is important for those living with HSV1 and HSV2 to stay current with the latest developments and discuss them with their healthcare provider.

One of the most difficult questions for virologists to answer is how and why HSV1 and HSV2 recedes into the sensory neurons where it goes dormant only to reawaken months, years, and even decades later. The mechanisms and reasons for this are not well understood and it is believed that the virus does this as part of its survival strategy. After all, a virus that is asleep is effectively off the radar of the body’s immune system which increases the viruses chances of long-term survival and enhances its ability to infect new hosts. Fortunately, scientists are making headway in disrupting this cycle as they learn more about the HSV1 capsid and how it facilitates this process. While there are many members of the herpes simplex family of viruses, each has its own unique structure and DNA composition and researchers at Harvard Medical School have discovered that the HSV1 virus utilizes a CTCF protein to reawaken itself after a period of latency. This protein essentially acts as an alarm clock, and when the virus is ready to “wake up,” the CTCF protein latches itself to the DNA of the virus which reactivates the virus that then travels through the nerves and causes an outbreak. What makes this discovery exciting is that the scientists have discovered that by disrupting the CTCF protein, they can significantly reduce the virus’s ability to wake itself up. Understanding more about this process is large step forwards in herpes treatment and finding innovative methods of preventing new genital herpes infections.

Cutting to the Chase

The DNA of the herpes virus has proved remarkably resilient, but it is not indestructible. One possible solution is to edit the herpes virus out of the cells within the host’s body. By using what are commonly referred to as “designer proteins,” scientists at various laboratories and research centers are exploring the possibility of using enzymes that would cut snippets out of the DNA of the host’s body. The pieces that have been removed by these molecular scissors can then be replaced with sections that would prevent the herpes virus from emerging and causing an outbreak. Essentially, the process would render the individual’s cells immune from infection. This research is in its very early stages and the results in animal testing have shown between a 2-4% reduction in the number of active viruses within the host, so while the initial stages show promising possibilities, researchers have a long way to go before this will be a viable method for treating cold sores caused by HSV1 and genital herpes caused by HSV2.

Rather, mutation to be more specific. Scientists at Northwestern University are working to develop a human vaccine for the herpes simplex virus by using gene mutations to disable the virus. By altering the R2 region of the protein UL37. scientists have discovered that while the virus remains capable of infecting epithelial cells, it becomes unable to infect neurons. This means that the virus cannot establish itself within the body and go into a period of latency where the immune system can’t detect it. This leaves the virus exposed to the full force of the immune system which can then detect it, attack it, and develop antibodies to counter it should the individual become exposed to herpes in the future.

Some Vaccines Falter and Fail…and Some Evolve

Vical and Astellas Pharma made a significant attempt at developing a vaccine to counter cytomegalovirus, or HHV5, which is one of the most prevalent members of the herpes simplex family. Like all herpes viruses, it is relatively harmless to a host with a healthy immune system, but like all herpes viruses, it can causes serious complications in patients with immune systems compromised by cancer, age, or other viruses such as HIV. The vaccine showed positive results up until the Phase III trial at which point it became clear that ASP0113 vaccine which targeted the DNA of HHV5 was unable to provide the desired protection to the organs of immunocompromised individuals.

However, as the saying goes, there is a silver lining. Vical continues to test VCL-HB01 which is in Phase II trials. The vaccine is under development to counter HSV2 genital herpes infections. With trials for ASP0113 at an end, the company is refocusing their efforts and resources towards VCL-HB01. It is expected that the company will be issuing an update into this research shortly following the conclusion of Phase II in mid-2018.

As with all viruses, herpes can become resistant to treatment. Whether it is HSV1 oral herpes or HSV2 genital herpes, a virus that develops resistance becomes significantly more complex to treat. At the University of Chicago in Illinois, researchers are examining the potential of the drug molecule BX795 to clear resistant HSV1 from the corneas of infected patients. They have discovered that a high concentrations, the drug is able to clear HSV1 from the cornea. This may lead to the development of a broad spectrum antiviral solution that can be administered to treat those recently exposed to HSV1 and HSV2, including infants who can acquire the virus during childbirth as they pass through the birth canal. It is currently believed that this finding may lead to topical and systemic therapeutic treatments that can clear the virus quickly and without causing damage to uninfected cells